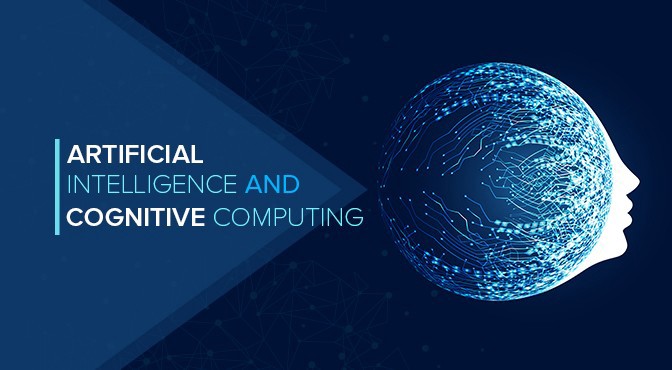 A Cognitive computer or system learn at scale, reasons with purpose and interacts with humans naturally. Rather than being explicitly programmed, these systems learn and reason from their interactions with human beings and their experiences with their environment. Cognitive computing overlaps with Artificial Intelligence and involves similar technologies to power cognitive applications.

What is Cognitive Computing?

Cognitive Computing  or Cognitive AI refers to individual technologies that perform specific tasks to facilitate human intelligence. Basically, these are smart decision support systems that we have been working with since the beginning of the internet boom. With recent breakthroughs in technology, these support systems simply use better data, better algorithms in order to get a better analysis of a huge amount of information.

Also, you can refer to Cognitive Computing as:

Now that you know what is cognitive computing, let’s move on and see how cognitive AI works.

Using computer systems to solve problems that are supposed to be done by humans require huge structured and unstructured data. With time, cognitive systems learn to refine the way they identify patterns and the way they process data to become capable of anticipating new problems and model possible solutions.

To achieve these capabilities, cognitive computing systems must have some key attributes.

So these were some of the differences between the two. Now let’s move ahead and understand the concept of Cognitive AI with example.

Cognitive computing and AI are technologies that rely on data to make decisions. But there are nuances between the two terms, which can be found within their purposes and applications.

Let us imagine a scenario where a person is deciding on a career change. An AI assistant will automatically assess the job seeker’s skills, find a relevant job where his skills match the position, negotiate pay and benefits. And at the closing stage, it will inform the person that a decision has been made on his behalf.

Whereas, a cognitive assistant suggests potential career paths to the job seeker, besides furnishing the person with important details like additional education requirements, salary comparison data, and open job positions. However, in this case, the final decision must be still taken by the job seeker.

Digital Citizenship: Becoming of a Virtual Being

We are the revolution! We are the Youth! We know the importance of knowledge, so we are here to provide you with the best quality of articles and blogs.We are increasing the high-quality content on daily basis for you all. In addition, we have a fantastic factual collection of our WriteX Specials along with Month-O-Pedia . And yes , we assure you that we will always try our level best to keep up with your expectations.
Contact us: writexofficial@gmail.com
© WriteX Today
MORE STORIES
Artificial Intelligence

WriteX - March 11, 2021 1
Artificial Intelligence has various applications in today's society. It is becoming essential for today's time because it can solve complex problems with an efficient way in multiple industries, such as Healthcare, entertainment, finance, education, etc. AI is making our daily life more comfortable and fast.
Go to mobile version
%d bloggers like this: